Presented as written by Naledi Shange, journalist at Times Live: 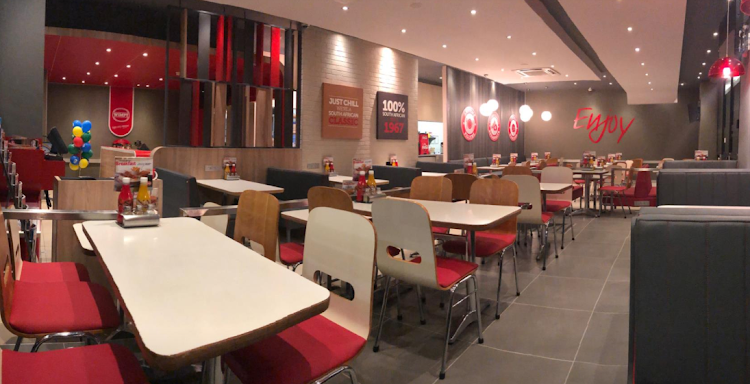 Famous Brands says it is aware that a boy was caught inside a locked toilet cubicle with a six-year-old girl at their Mooinooi Wimpy restaurant.
Image: Wimpy SA via Facebook

Police are investigating an incident at a Wimpy restaurant in Mooinooi in North West province where a young teenage boy was accused of harassing a small girl in the men’s toilets.

Famous Brands, the owners of Wimpy, confirmed to TimeLIVE that the incident had occurred at their Mooinooi branch on election day; and police have confirmed the matter is under investigation.

A video of a confrontation that ensued between the boy, appearing to be in his early teens, a woman and the mother of the girl who was found in the toilet, has gone viral on social media.

TimesLIVE has chosen not to show the video as it involves minors.

The two-and-a-half-minute-long video shows the woman gripping the boy by the arm, who insists he did nothing wrong.

“She asked me to do it,” the boy is heard saying in his defence.

The woman instructs the boy to call his mother. “I don’t know her number,” the frantic boy, dressed in blue shorts and a jacket, replies.

Someone else, believed to be the child’s mother, is heard instructing other staff members to rather call the police. She is the person believed to be recording the confrontation.

“You just only have to tell us the truth, that’s all. She is just a child! She cannot ask that from you. So what do you want to do? Go home and leave her just like that?” says the first woman.

All the while, the little girl is standing next to them, dressed in a pink tracksuit with Barbie characters on it, carrying her blue takkies in her hands.

“Please don’t call the police. I didn’t do it,” the boy replies.

“If you were just kissing, why were your pants off?!” the mother of the child shouts in anger.

The first woman then turns to the child and asks what the boy did to her. While the child’s response is barely audible, the woman repeats what she heard the girl say.

“He was sleeping on you,” the woman says, repeating the girl’s words.

She is shocked, and shouts, “Oh my God”, while the boy, still in her grasp, shouts that he did not do it.

“Why did you not go to the child’s mother and tell her that her child is asking you to do things to her?” the boy is asked.

“I cannot find my child undressed with you in the toilet! The men’s toilet for that matter,” the mother of the child says.

“And when I knocked there, [my daughter] said hello. This one [the boy] says I am busy in the bathroom. He doesn’t want to open the door! You are busy doing what?!” she asks him.

“But she wanted me to…” the boy mumbles.

“What do you do with a six-year-old?!” the angry mother replies.

“She wanted to kiss me,” the boy replies, trying to explain that he was heading to the bathroom when the little girl approached him.

Even after being told that the cameras would clarify whether his version is true, the boy insists on his version, pointing outside to another boy, saying he could verify this.

Famous Brands has said it is co-operating with the police on the matter.

“A charge has been opened at the Saps and we are committed to working with the authorities in their investigation. As this is a police matter, we are unable to confirm any further information,” the company said.

“The safety of our customers is of the utmost importance to us and we work hard to make sure that our customers feel safe and secure at all times. We will cooperate with the police in their investigation,” the company said.

North West police confirmed that a case had been opened. Brig Sabata Mokgwabone said he could not provide details as both parties concerned were minors.

Do NOT follow this link or you will be banned from the site!

For more information on COVID-19 and government regulation: Click here